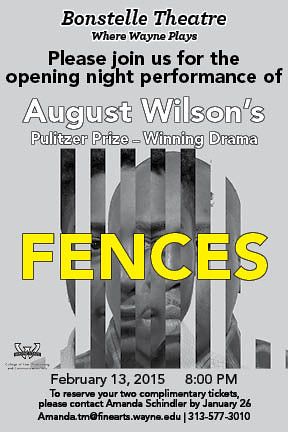 Award winner Lynch Travis will guest direct August Wilson’s play in recognition of Black History Month. “Fences” is about the tensions between a Negro League baseball player turned garbage man, his family and the society of late 1950s Pittsburgh.

Dante Jones, in the supporting role of Jim Bono, said Travis’ strong vision got the play to performance level despite losing 1 ½ weeks from weather and auditions.

“He knows what he wants which is very helpful,” Jones told The Yellow Wall.

“He’s really good at accepting things we bring to the table and letting us know whether or not they work.”

Despite reduced time, the cast extensively researched the 1950s and human subjects for their roles. Along with costumes by Melissa Hall and a collage set design by Chista Tausney, the tone and authenticity of the production should match “Fences’” realism.

“Fences” has offensive language but older families and those looking for an honest play about African American struggles may enjoy it.

The show is currently around two hours long but Jones anticipates the speed to pick up by opening night, Feb. 13 at 8 p.m.